Filler Steamrolls Into The Knockout Rounds 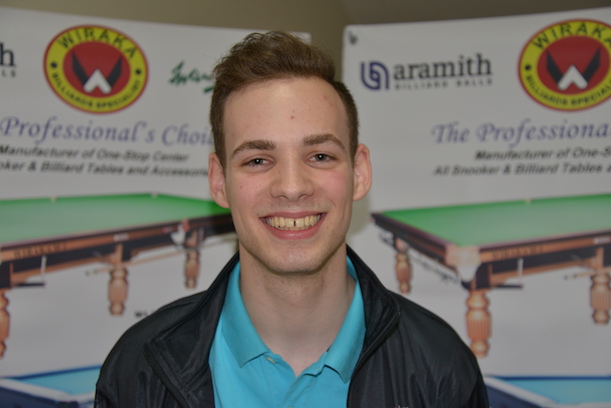 Young German star joins 31 other players in the final 64 as the field is cut in half after Day 2.

The action at the 2017 World 9-ball Championship picked up apace on Day 2, as 32 players out of the field of 128 were shown the exits, while another 32 punched their tickets to the Final 64 single elimination knockout stage.

The remaining 32 players to vie for pool’s most prestigious crown will be determined on Monday at the Al Arabi Sports Club in Doha. From there all eyes will be on the prize, as whoever wins six straight matches over three days will be crowned the new champion of the world in 9-ball come December 14th.

For those who hastily got their pink slips on Sunday, there wasn’t too much misery to speak of. This was due to the fact that most of the 32 players who took their second defeats really had no hope of making much noise in the first place. However, there were several shockers that still turned some heads throughout the pool world.

Mika Immonen is normally a player fans expect to make a run in big events. But the 44 year old Hall of Famer never seemed to get it together this week. In a do or die match against Korea’s Woo Seung Ryu, Immonen fell flat for the second day in a row, bowing out of the tournament in the group stage via a 9-5 score line.

Alex Pagulayan reached the semi-finals last year here in Doha, but 2017 in Doha turned out to be a stinker for the Fil-Canadian. The gregarious 39 year old fell to Lebanon’s Mohammad Berjawi , 9-7, and was knocked out barely after the proceedings had begun.

Other notable players who were shown the exits included China’s Wang Can, and Japan’s Toru Korubiyashi.

For the Americans, the 2017 campaign will go down as perhaps the worst in the illustrious 25 year history of the World 9-ball Championship. No big name American players bothered to make the trip to the Middle East this year. And the two that did, Hunter Lombardo and Robert Hart, both went two matches and out. This could be the first time in history that the last 64 of the World 9-ball Championship will not feature one single American player.

The field that is taking shape for the final 64 is, however, looking very deep indeed. One thing that is certainly quite apparent already is that the youth movement throughout the sport will continue and expand this week in Doha.

20 year old German Joshua Filler has been generating tons of excitement throughout the pool world lately. His incredible talent and devil-may-care shooting style has many proclaiming that the German youngster is destined to be the Ronnie O’Sullivan of the pool world. Despite a long trip from Vegas where he won the Mosconi Cup and captured the MVP prize for Team Europe, Filler hasn’t missed a beat here in Doha. On Sunday he played without a care in the world, first taking down Greece’s Damianos Giallourakis, 9-6, and then handily defeating China’s Kong Dejing by the same score for a spot in the final 64.

“I feel really exhausted and not quite the same,” Filler said after his second win. “I won both matches 9-6. I just have to improve my break and let’s see what happens over the next few days.

“You can’t really compare this to the Mosconi Cup where you play in front of 1500 people and millions at home. There is so much pressure because you play for your team and your country. Here I play more relaxed and there’s not too much pressure.

“Inside I feel very confident, I say to myself I’m the best player but I need that. I just play my best game and I want to win this world championship. At 20 years old it would be perfect. At the beginning of this year I had two dreams. One was to win the Mosconi Cup and the other was to win the World Championship.”

Another youngster grabbing a lot of attention is 19 year old Albanian Klenti Kaci. While the exact opposite of Filler in terms of speed and style, the talented Kaci always seems to find a way to win, no matter the opponent. On Sunday, the Albanian star defeated Chu Bingjie of China to qualify for the final 64.

The Philippines is looking like it will send its usual armada to the knockout rounds. Carlo Biado, Jeffrey De Luna and Jeffrey Ignacio all won their second straight matches and qualified for the final 64. Warren Kiamco, Johann Chua, Francisco Felicilda, and Roland Garcia all lost on the winners side of their groups and will have one more chance on Monday to try and make the knockout rounds.

It was a good day for South America at the World 9-ball Championship. Venezuela’s Jalal Al Sarisi(Yousef) beat the Philippines Johann Chua 9-8 to advance. Peru will have its first ever player in the knockout rounds after Martines Gerson defeated Germany’s Andre Lackner 9-8.

Japan’s Naoyuki Oi barely squeaked by Canada’s John Morra, 9-8, to qualify. While compatriot Hayato Hijikata took down Estonia’s Dennis Grabe on the winners side to make the knockout rounds.

Play in the group stages continues at the Al Arabi Sports Club in Doha on Monday beginning at 10am Doha time(GMT +3). All matches will be do-or-die on the one loss side of the brackets. The winners will advance to the final 64, while the losers will be out of the tournament.