It's Europe over Asia at the Junior Worlds

All three final matches of the tournament were European player vs Asian. And in all three the Europeans prevailed. The hosts finished on a high note winning two gold medals. 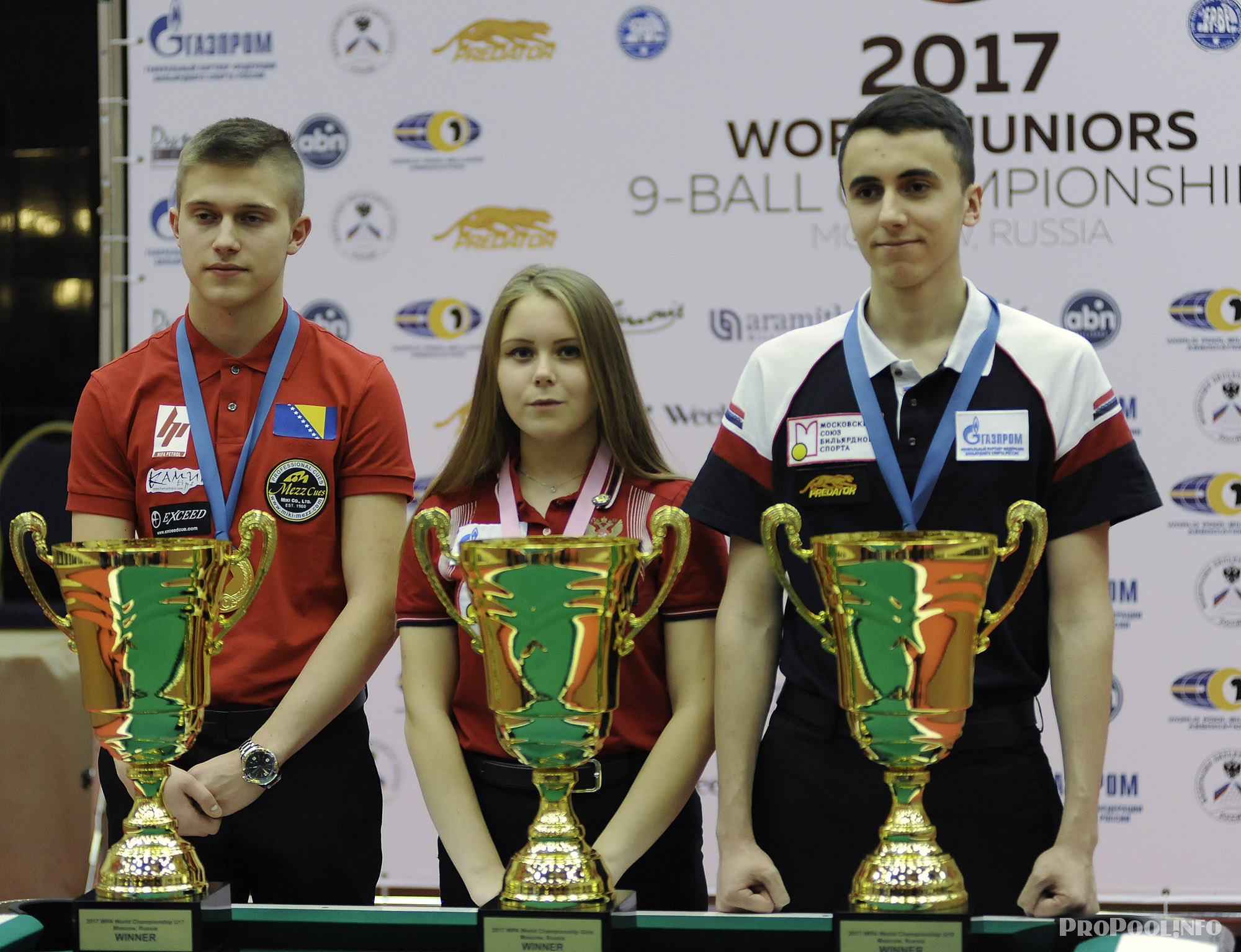 In U17 juniors division the semi-finals featured three EPBF team representatives and one player from Asia. Robbie Capito is a Filipino from Hong Kong where he was born and raised. Everybody who is into pool world is aware of the Filipino pool talent. Capito defeated Mustafa Alnar to proceed to the finals. His opponent appeared to be Sanjin Pehlivanovic (Bosnia and Herzegovina) who defeated his long-term rival at the junior level Wiktor Zielinski of Poland.

In the gold medal match Pehlivanovic produced a performance of his life so far. He played nearly flawless, presumably at Accu-Stats rate about .980 or so. He never missed a shot and only had to play safe a couple of times. At the same time his Hong Kong opponent was struggling with his break shots quite a bit, and even opening bank shots didn't come to rescue. The final result was as clear as it could be at 9-1.

U19 girls division had some early favorites in the likes of Kristina Tkach (Russia) and April Larson (USA). Not to forget about strong Korean girls and the defending champion Chen Chia Hua (Chinese Taipei). In the end all of them got to the semis, with the Korean banner carried by Lee Woo-jin who defeated her fellow Seo Seoa.

Lee continued steady performance overpowering Chen. An early lead helped to relieve tension, and some strong safeties sealed the deal for Lee even though the Taiwanese champion tried to come up with sort of a comeback. April Larson pushed Kristina Tkach all the way to 7 racks each and the outcome was still mystery. But from there it was the Russian who won two straight racks for the victory.

The final match was emotional and error-prone from both sides but Tkach managed to compose herself better and faster than Lee. The scoreline of 9-6 and a gold medal for excitement of local fans.

Another Russian hope was Fedor Gorst who came up in terrific form. Intense work during preparation process paid off as Gorst was seemingly flawless through the event, twice handing defeats to Patrick Hofmann and Temuujin Enkhbold (last year's runner-up). Hofmann and Jan van Lierop (Netherlands) finished 3rd, Enkhbold got his second back-to back silver medal which is pretty solid. And Fedor Gorst is a junior world champion!